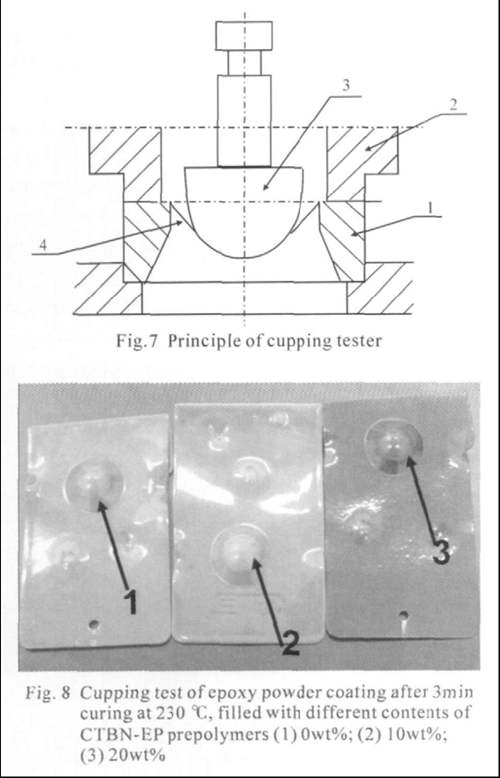 A cupping tester is mainly used to determine the adhesion of FBE powder coating, and Fig.7 shows the test principle of the cupping tester. The head of the cupping tester is spherical, pushing the back of coated panels to test whether the positive film cracked or separated from the substrate. Fig.8 is a cupping test result of the epoxy powder coating. It could be seen that the FBE powder coatings that are not filled with CTBN-EP prepolymers have small visible cracks (Fig. 8(1)), whereas the coatings filled with CTBN-EP prepolymers (Fig. 8(2-3)) have no visible cracks, indicating good adhesion and toughness. 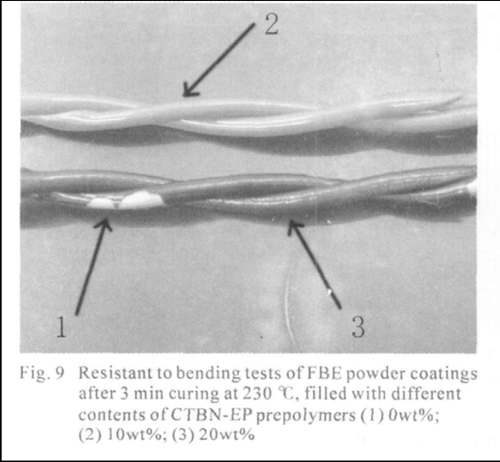 The corrosion resistance of the coatings are evaluated by exposing the coatings to a salt fog atmosphere generated by spraying 5wt% aqueous NaCl solution at 35 ± 2 °C for 3000 h in accordance with ISO 14655:1999 specification. After removal from the salt fog chamber, all samples are rinsed with distilled water to remove any residues, the corrosion of coating is observed. It could be seen from Fig.10, after the coatings are filled with CTBNEP prepolymers (Fig.10b), there is no evidence of rust, and the specimens are holiday-free, indicating the corrosion resistance of coatings fi lled with CTBN EP prepolymers could meet the requirements of the standard. 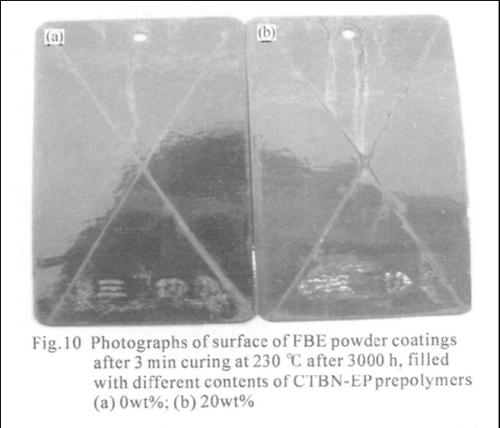 The corrosion resistance of an organic coating without defects depends on mainly its barrier properties, i e, how it reduces the diffusion of moisture and corrosive ions through the film. Amongst the parameters which contribute to barrier properties is the attack of the underlying metal substrate. The coating near the bare area creates a passivating layer on the substrate that prevents further corrosion. Hence, it can capture the ions (possibly Cl−) easily to form the doped polymer.