A chromate-free pigment has a good anti-corrosion performance by the functions which passive a surface of a substrate due to its high oxidizability, forms an adamant deposited pellicle comes from reduction products of a chromate, and stabilizes the protective pellicle by a pH buffering. Good anti-corrosion performances like a chromate primer can be expected by the replacement to some pigments which have the similar anti-corrosion function to a chromate pigment. Furthermore, the organic binder’S design of a chromate-free primer which means selection of adhesive resins or additives is also effective.

The substrate used in this study is a galvalume sheet (plating 55wt%A1-45wt%Zn) which has 0.5mm thickness, and pretreated by a chromate or chromate-free chemical conversion coating. The chromate primer containing strontium chromate (SrCr204) and the developed chromate-flee primer are coated on the substrate (chromate: 5g/m2, chromate-free:8.5g/m2). The top coating is polyether-melamine type binder (13.8g/m2). To select the effective anti-corrosion pigments, good adhesive resins or additives, samples in Table 1 were investigated. 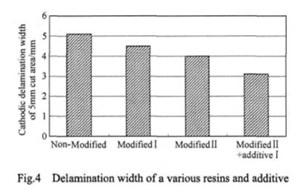 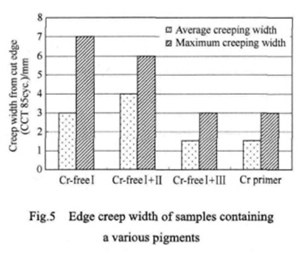 (1)Anti-corrosion and adhesive performances were evaluated by electrochemical impedance spectroscopy(EIS) method and electrolyzed delamination method.
(2)To compare corrosion resistance, it suggested that the combination of Cr-freeⅠand Ⅲpossessed the best rust prevention function.
(3)In the comparison of cathodic delamination width was found that the modified epoxy resinⅡpossessed a good adhesion performance and the combination of modified epoxy resin Ⅱand additive I showed the best adhesion function.
(4)The chromate-free primers containing the effective anti-corrosion pigment, adhesive resin and additive which selected by EIS or electrolyzed delamination method shown a good anti-corrosion performance at CCT 85 cycle. 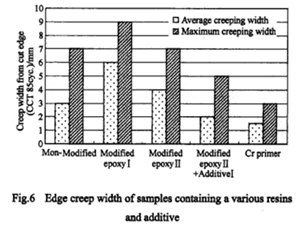