Conventional sol-gel coatings were prepared using MTMOS and TEOS as silane precursors to form a smooth, clear and dense organic/inorganic network on an aluminum alloy substrate. Such coatings are known to have excellent adhesion due to their ability to form Al-O-Si linkages at the coating/substrate interface. 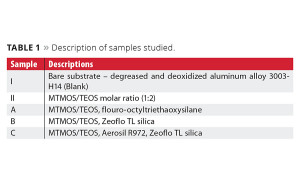 Sample-II in this study represents such a conventional sol-gel coating. In order to reduce surface energy, and hence increase hydrophobicity, we incorporated an organo-silane containing a fluorooctyl chain, in addition to MTMOS and TEOS (sample A). Alkyl chains containing fluorine atoms are known to provide substantial hydrophobicity. Such chains, when attached to the polymer network via flexible siloxane linkages, would have a tendency to orient at the surface and hence reduce the surface energy of the coatings, as depicted in Figure 1. Since the hydrophobic property depends not only on the chemical composition of the surface, but is also influenced by the topography of the films, we attempted to produce coatings with varying degrees of surface roughness. In samples B and C, micro and nanosilica particles, respectively, were incorporated to create surface roughness that would enhance hydrophobicity. The use of microparticles (sample B) and micro + nanoparticles (sample C) were used to understand the effect of orientation of such particles at the surface, and hence, the resultant hydrophobicity.

Figure 2 shows the schematic representation of hypothesized surface topographies of coatings with and without nano/microparticles, and their water contact angle on such surfaces.