Tribo Charging Method – How It Works 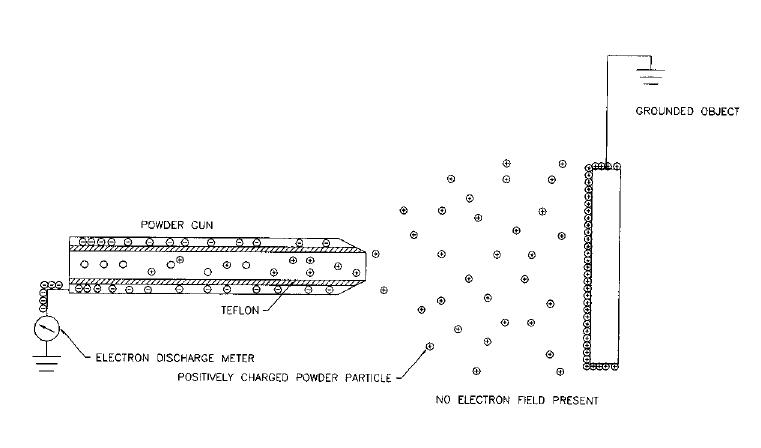 Tribo charging has typically been limited by the types of powder it can apply. This is due to the fact that dissimilar materials must be used to create an electron swapping situation. (See diagram #3.) Teflon is typically the material used in the gun because of its ability to accept and discharge electrons and its wear characteristics. Because telfon is on the negative end of the table, materials at the positive end are the most successfully used as tribo powders. The best example of this is epoxy which has for years been one of the few powders that is consistently used for tribo. However, in recent years powder manufacturers have been able to develop tribo formulations of
many other powders including polyesters, urethanes, and hybrids that can successfully be used with tribo.

The tribo gun is designed to maximize the amount of interior surface area the powder is capable of coming in contact with in order to achieve optimum charging. This is the reason tribo guns are often longer than corona guns. There are tribo guns with one inner tube that has air ports positioned so as to create a spiral effect of the powder as it passes through the tube. There are also guns that have multiple tubes that split the powder into smaller, more concentrated areas as it passes through the gun. Another type gun has a wavy surface down the length of the inner tube of the gun that creates contact as the powder passes through the gun. While these guns are capable of charging the powder, concern must be taken in cleaning and wear of the gun. Some guns are time consuming to clean because of the multiporting or uneven surfaces inside the gun.

As in corona guns, tribo has a wide variety of nozzles. Many of the same style nozzles are used for both corona and tribo. One style nozzle used with tribo guns is the multi-head nozzle. This nozzle allows a great deal of flexibility in directing powder into comers and difficult areas. Also, tribo guns do not have electrodes in the powder stream as corona guns do. This provides an advantage in gun cleaning and wear.

[Thanks for Michael J.Thies,please contact us if any doubt]

Posted in Guide to Powder Coating | No Comments »

« Corona Charging Method-How It Works
Differences Between Tribo and Corona »