Hot-dipped Zn55Al1.6Si galvalume coating has been widely used in many fields such as automobile industry, shipbuilding, machinery industry etc, owing not only to its better anti-corrosive performance than that of Zinc coating,but also to its low cost (the price of Al is lower than that of Zn at present). Rare earths such as La can hinder scale growth and increase scale adhesion, thus they have been employed to protect steels and other metallic alloys against oxidation and corrosion. However, there are only few literatures published on the application of La in hot dipped galvalume coating, and in this paper the effects of the La addition on corrosion resistance of the hot-dipped galvalume coating were investigated.

The weight loss test was measured by copper-accelerated acetic acid salt spray testing (CASS) and immersion corrosion tests carried out in a salt spray chamber and 3.5% NaCl solution. After the tests, the corrosive products were removed by mechanical means, rinsed with running water, then dried by cold-blast air and the weight loss measured by electronic scale. In both cases, three parallel samples were made to get more precise results. The testing time was 120 h for CASS test and 840 h for immersion test.

Electrochemical test was carried out by IM6e electrochemical work station supplied by Germany, taking platinum plate as counter electrode, saturated calomel electrode as reference electrode, and hot-dipped Zn-Al-Si-La coatings mild steel wire as working electrode. The corroding medium was 3.5% NaCl solution. The surface area exposed to the test solution was 1cm2. Electrochemical impedance spectroscopy (EIS) measurements were carried out with the frequency range went from 10 kHz up to 10 mHz, the width of the sinusoidal voltage signal was 10 mV (rms).Weak polarization curves were recorded at the voltage range from -70 mV to 70 mV, the scanning rate was 1 mV/s. In both cases, experiment did not start until the corrosion potential remained stable (a variation of less than 5 mV in 5 min). 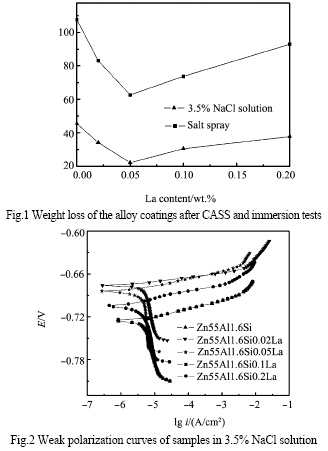 Fig.1 illustrates the results of the weight loss tests in the salt spray cabinet and 3.5% NaCl solution. The corrosion rate of the samples in both cases decreased firstly with increasing La content up to 0.05wt.% and then increased with further increasing La content. Therefore, the best corrosion resistance was experienced in the coatings containing 0.05wt.%La. It was found that during the immersion test, red rust was found earliest on the 0wt.%La coating surface in 3.5% NaCl solution, however, until the immersion test ended, there was no red rust on the 0.05wt.% La coating surface. 2.1.2 Electrochemical test 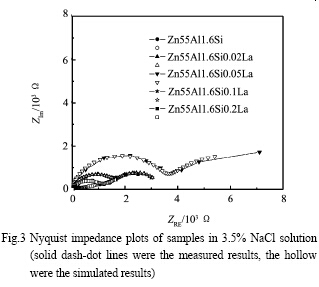 Fig.3 represents of the Nyquist diagrams recorded for coatings with different amounts of La addition exposed to 3.5% NaCl solution for 0.5 h. In all cases, there were two arcs which meant two-time constants. The one appearing at high frequency represented dielectric characteristic of the alloy coating, while the one at low frequency corresponded to that of the mild steel substrate in the pores (i.e. Coating defects). As the La addition increased, the diameter of high frequency arc increased, this effect was more pronounced in case of Zn55Al1.6Si0.05La alloy coating. With further increasing the La content, however, the diameter of high frequency arc decreased inversely. Meanwhile, the center of all the arcs leaned to the fourth quadrant, indicating that the dispersion effect happened on the electrode surface.Under this condition, better results can be obtained by using CPE (constant phase element) instead of pure capacitance which was demonstrated by other research groups.