Wettability is an important feature of the solid surface, which is determined by the chemical composition and morphology of the surface. Super-hydrophilic and super hydrophobic surface characteristics are the main contents of invasive studies. The superhydrophobic (water-repellent) surface generally refers to the surface that the contact angle between water and surface is greater than 150 degrees. That people know superhydrophobic surface is mainly from plant leaves – lotus leaf surface, “self-cleaning” phenomenon. For example, water droplets can roll to roll on the surface of the lotus leaf, even if some of the sewage water pour in the leaf, it will not leave a stain on the leaves. Such unstained lotus leaf characteristics are called “self-cleaning” effect. 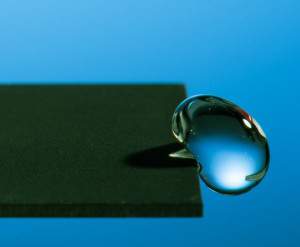 Why such a “rough” surface can produce superhydrophobic

In the natural world,except that the lotus leaf has “self-cleaning” capability ,there are others such as rice, taro plants and feathers like birds.The special significance of this “self-cleaning” effect is in addition to maintaining the surface of the cleaning, as well as for the prevention of pathogens invasion. Because even with the pathogen to the leaf surface, it will be washed away. So like this, even the lotus plant growing in a “dirty” environment is not easy to get sick, very important reason is because of this self-cleaning capability.