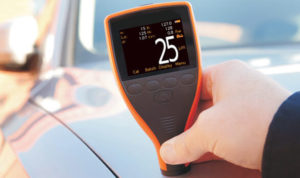 For measuring coating thicknesses of 5 μm or less, the average of several measurements shall be taken.

It may not be possible to obtain the measurement uncertainty specified in Clause 8 when measuring coatings of less than 3 μm in thickness.

5.2 Electrical properties of the basis materials

For each instrument there is a critical minimum basis metal thickness above which measurements are not affected by an increase in thickness. Since this thickness depends on both the eddy current generation frequency of the probe system and the electrical properties of the basis material its value should be determined experimentally, unless otherwise specified by the manufacturer.

An explanation of Eddy current generation and the calculation of the required minimum basis materia thickness, dmin, is given in Annex A.

However, in the absence of any other information, the required minimum basis material thickness, dmin, can be estimated from the equation:
dmin = 2,5 δ0
where δ0 is the standard penetration depth of the basis material (see A.1).

Eddy current instruments can be sensitive to abrupt changes in surface contour of test specimen. Therefore measurements made too near to an edge or corner may not be valid unless the instrument has been specifically calibrated for such measurements (see 6.2.4 and Annex B).

NOTE When compared with the phase-sensitive method of ISO 21968, the amplitude-sensitive eddy current instruments can be substantially more heavily affected by edge effects.

Measurements are affected by the curvature of the test specimen. This influence of curvature varies considerably with the make and type of instrument and probe, but always becomes more pronounced as the radius of curvature decreases. Measurements made on curved test specimens might not, therefore, be valid unless the instrument is specifically calibrated for the surface curvature in question, or a special probe, which compensates for surface influence, is used.

Measurements are influenced by the surface topography of the basis material and of the coating. Rough surfaces can cause both systematic and random errors. Random errors can be reduced by making multiple measurements, each measurement being made at a different location, and then calculating the average value of that series of measurements.

NOTE When compared with the phase-sensitive method of ISO 21968, the amplitude-sensitive eddy current measurement can be more heavily affected by basis material roughness.

Lift-off can be produced unintentionally, e.g., by the presence of foreign particles between the probe and the coating.

The probe tip shall be checked frequently for cleanliness.

The pressure with which the probe is applied to the test specimen affects the instrument readings and shall therefore be made constant.

This pressure effect is more noticeable when the coatings are soft. Most commercially-available instruments are supplied with constant pressure probes.

Unless otherwise instructed by the manufacturer, the probe shall be applied perpendicularly to the coating surface as tilting the probe away from the perpendicular can cause measurement errors.

The possibility of tilt occurring inadvertently can be minimized by probe design or by the use of a probe-holding jig.

Because temperature changes affect the characteristics of the probe, it should be used under approximately the same temperature conditions as those used for calibration unless the probe has built-in temperature compensation.

It has been found that some instruments having probe systems operating with multiple frequencies can measure both top and intermediate coatings.